Under Section 211(o) of the Clean Air Act, each November, the Environmental Protection Agency (“EPA”) is required to set standards for the percentage of renewable fuel that must be included in gasoline and diesel produced or imported into the United States the following year. The EPA―which was required to issue a catch-up rule in 2015 setting the standards for 2014, 2015, and 2016―has been generally successful in meeting (or nearly so) the statutory deadline during the Trump administration. However, the COVID-19 pandemic and the associated decrease in travel/demand for fuel has complicated the EPA’s decision-making process, and this year the deadline was missed. The new priorities of the incoming Biden administration will likely further delay the issuance of the new standards.

Section 211(o) of the Clean Air Act, as amended, requires that transportation fuel sold or introduced into commerce in the US (except in noncontiguous states or territories) contain a specified volume of renewable fuel on an annual average basis. The renewable fuel standards are expressed as volume percentages, known as Renewable Volume Obligations, and are used by obligated parties (refiners and importers) to determine their compliance obligations. The EPA sets the applicable percentages for cellulosic biofuel, biomass-based diesel, advanced biofuel (which includes cellulosic biofuel and biomass-based diesel), and total renewable fuel (which includes advanced biofuel, as well as conventionally produced ethanol) such that if each obligated party meets the percentages, and if the EPA’s projections of gasoline and diesel use for the year are accurate, then the amount of all renewable fuel and of cellulosic biofuel, biomass-based diesel, and advanced biofuel used will meet the required volumes on a nationwide basis. Thus, to set the renewable fuel percentage standards, the EPA must first specify the required volumes for each fuel type.

On December 19, 2019, the EPA finalized volume requirements under the RFS program for 2020 for cellulosic biofuel, advanced biofuel, and total renewable fuel, and for 2021 for biomass-based diesel. 85 Fed. Reg. 7016 (Feb. 6, 2020). In May 2020, the EPA delivered to the Office of Management and Budget (“OMB”) a proposed rule setting volume requirements for 2021; however, the proposal remains under OMB review and has not been released for public comment. The annual volume standards for 2010-2020 (and the final biomass-based diesel volume for 2021) are set forth in the table below; all volumes are in billions of gallons, except cellulosic biofuel, which is in millions of gallons, and all are ethanol-equivalent, except biomass-based diesel, which is actual. 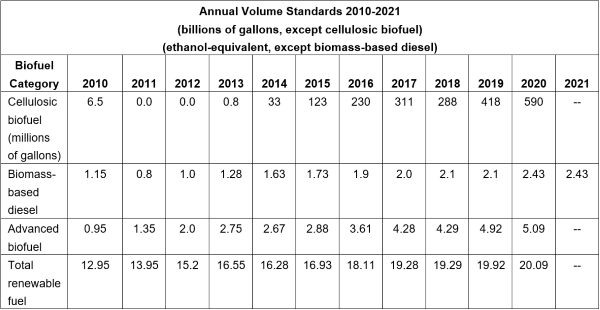 When the EPA sets the applicable volume for cellulosic biofuel below the volume specified in the Clean Air Act, the EPA is required to offer waiver credits that can be purchased in lieu of acquiring cellulosic biofuel Renewable Identification Numbers (“RINs”), which are used for compliance with the renewable fuel standards. For the 2019 compliance period, the price per waiver credit is $1.77. 85 Fed. Reg. at 7025, n. 36.

The EPA also has general authority under Section 211(o)(7)(A) to wave the statutory volumes based on economic or environmental harm or inadequate domestic fuel supply. For 2020, the EPA declined to use this authority, finding that the statutory criteria were not met.1

The EPA can grant limited compliance exemptions to small refineries based on economic hardship and has issued approximately 80 such waivers. In addition, on October 21, 2020, a group of oil-state senators submitted a letter to EPA Administrator Andrew Wheeler, asking him to waive the 2021 standards to prevent increased use of renewable fuels and to “account for the unprecedented collapse in demand for gasoline, diesel, and jet fuel.”2 The ethanol industry has criticized such waivers as reducing demand for ethanol.

In January 2020, the Tenth Circuit vacated exemptions granted by the EPA to three refineries, finding that the EPA can only grant extensions of existing exemptions (going back to 2010) and cannot grant new exemptions. Renewable Fuels Assoc. v. HollyFrontier Cheyenne Refining LLC, No. 18-9533 (10th Cir. Jan. 24, 2020). The subject refiners have sought review by the Supreme Court, arguing that the Tenth Circuit’s decision would “forever preclude[] from receiving an exemption” a small refinery that does not experience disproportionate economic hardship for a single year; the EPA has not appealed the decision.

In November 2020, the Fourth Circuit vacated the EPA’s decision denying a small refinery economic hardship exemption, finding that the EPA had treated similar refineries differently. Ergon-West Virginia, Inc. v. EPA, No. 19-2152 (4th Cir. Nov. 17, 2020). The Fourth Circuit did not address the question of new exemptions versus continuing exemptions at issue in Renewable Fuels Assoc.In September 2020, the EPA rejected 54 requests by refineries for hardship exemptions for compliance years 2011-2018. In November 2020, EPA Administrator Andrew Wheeler said the agency has 35 more pending waiver requests for 2019 and 2020, but will not make a decision on those requests until after the Renewable Fuels Assoc. litigation is concluded.

The Biden administration will have to answer several key questions regarding the renewable fuels program, including (i) whether to offset the limited availability of cellulosic ethanol with increased requirements for conventional renewable fuels or to maintain the implied statutory volumes for non-cellulosic advanced and conventional renewable fuel as the Trump administration has done, and (ii) the appropriate scope of small refinery waivers. A potentially lengthy delay in the issuance of 2021 standards will create significant uncertainty for the renewable and conventional fuel sectors. We will provide updates on further developments as they become available.

1 In 2017, the D.C. Circuit vacated the EPA’s use of the general waiver authority based on inadequate domestic supply, finding that the EPA had impermissibly considered demand-side factors in its assessment of inadequate domestic supply, rather than limiting its assessment to supply-side factors. Americans for Clean Energy v. EPA, 864 F.3d 691 (D.C. Cir. 2017).

This memorandum is a summary for general information and discussion only and may be considered an advertisement for certain purposes. It is not a full analysis of the matters presented, may not be relied upon as legal advice, and does not purport to represent the views of our clients or the Firm. Eric Rothenberg, an O'Melveny partner licensed to practice law in New York and Missouri, and John D. Renneisen, an O'Melveny senior counsel licensed to practice law in the District of Columbia, contributed to the content of this newsletter. The views expressed in this newsletter are the views of the authors except as otherwise noted.